The year 2017 has started on a positive note for all the lower rung teams as International Cricket Council took the initiative of introducing the Dessert T20 competition.

The year 2017 has started on a positive note for all the lower rung teams as International Cricket Council took the initiative of introducing the Dessert T20 competition. This competition is going to be a one-week affair which will include the 8-team. The teams to participate in this series are Afghanistan, Ireland, The Netherlands, United Arab Emirates (UAE), Hong Kong, Namibia, Oman and Scotland. And the will have two groups A and B featuring four teams each. This competition brings with itself a chance for all these teams to play competitive effort which can generate some talented cricketers from these nations. The tournament features 12 league games, played across two groups, before two semi-finals and the finals, all to be played on January 20th.

Namibia was included in the tournament at the very last moment after Papua New Guinea (PNG) refused to take part in the tournament. The majority of the games are scheduled to be played at the Sheikh Zayed Stadium, Abu Dhabi while the last four games of the group stage and the 2 semi-finals and the final is to be played at the Dubai International Cricket Stadium, Dubai. Afghanistan, United Arab Emirates, Ireland, Namibia are in the Group A while Netherlands, Hong Kong, Scotland and Oman are included in the Group B. Each team will play three games against teams in their group, with the top two advancing to the semi-finals while the winning team gets 1 point each.

So far, two games have been completed on Day 1 of the series which included the clash between Afghanistan and Ireland from Group A while Hong Kong took on Scotland in Group B; off which Afghanistan and Scotland emerged victorious by 5 wickets and 24 runs respectively. 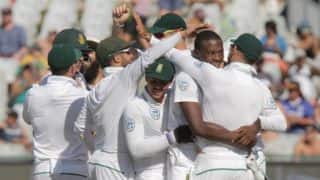