Australia batsman Cameron Bancroft is steadily plotting his return to professional cricket as he serves his nine-month ban.

With his nine-month ban from cricket for his involvement in the infamous ball-tampering scandal in Newlands set to end on December 29, Australia batsman Cameron Bancroft is slowly but steadily plotting his return.

He recently returned to playing professional cricket when he led his club Willetton to a nine-wicket win against Midland-Guildfordin. His return with the bat wasn’t impressive 4 off 13 deliveries but he did take three catches while fielding in the slips.

While serving the ban, Bancroft’s biggest challenge has been to how to detach himself from cricket and to do that he completed a yoga teaching course and learned Spanish among other things during “one of the most unbelievable months I ve ever had.”

“You don t realise how much the game is part of you until something massive like Cape Town happens,” Bancroft said of his role in the ball-tampering scandal that resulted in him being banned by Cricket Australia alongside Steve Smith and David Warner. “I’ve been challenged a lot and to be able to detach myself from cricket has been one of the biggest lessons I’ve had to learn.”

The period has also given the 25-year-old to reflect on what he thinks of himself as a person. “Learning to detach myself from this guy that was a professional cricketer … it s who I thought I was as a person. There have been times I haven t played cricket and sat there and wondered how I got here. To be here now is another part of the journey and I m here to embrace it,” he said.

However, Bancroft, who has played eight Tests so far, has managed to find the mental peace following the scandal. “The more I have been able to let that go and understand who I am certainly breaks the anxiety that you put yourself under as a professional sportsman. Dealing with those challenges has been difficult, but part of the journey,” he said. 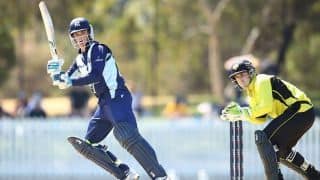