Vijay was dropped from India's XI for the last two Tests in Australia after a lean run.

Discarded India Test opener Murali Vijay has revealed the devastation he felt when he lost his place in India‘s XI in Australia last year, while vowing to make a comeback.

Speaking to The Hindu, the veteran of 61 Test matches said that being dropped from India’s XI for the Boxing Day Test in December came as a jolt.

“I feel hurt that I am not a part a part of the Indian team. I am not disappointed. But really hurt,” said Vijay. “I expected to play the Test. In fact, I was sure I would play the Test. I had batted well in the second innings of the second Test at Perth. I felt I was only one innings away from form.

“I deserved that one chance in the Boxing Day Test. I was full of hope and optimism ahead of the Test.”

Vijay averaged 18.80 last year, a number boosted by 105 against Afghanistan, which is his only 50-plus score of 2018 in 15 Test innings. In four innings in Australia in December, the 34-year-old managed 49 runs with a best of 20. Thrice he was dismissed by Mitchell Starc, which prompted the team management to drop him for the MCG Test where Mayank Agarwal made his debut and scored 76 and 42 in a series-clinching victory.

Reflecting on the days leading upto the Boxing Day Test, Vijay said his mood fell the day before.

“From the vibes I got on the day before the eve of the Melbourne Test … I could sense it from the way the practice session and the nets were shaping out. I was devastated,” he said.

Vijay sat out the final Test in Sydney, where Hanuma Vihari dropped back into the middle order and KL Rahul was reinstated as opener alongside Karnataka. In four innings across the Adelaide and Perth Tests, Rahul had managed 48 runs, of which 44 came in one innings.

India next play Tests in the West Indies after this summer’s World Cup, and then host South Africa in October. Agarwal appears to have laid claim to the Test opener’s slot, and with young Prithvi Shaw – who was Man of the Series in his first two Tests for India – back playing cricketer after the gruesome injury picked up in Australia, Vijay has fallen further back in line.

Still, he is confident of playing for India again.

“I have scored nearly 4000 Test runs for the country, I must be pretty good to have done that,” he said. “I have made runs in difficult conditions, in England and Australia. And I came through a period when Virender Sehwag and Gautam Gambhir were there. I don t feel intimidated by competition.

“I will play till my heart tells me to play, you can’t take that away from me. I am fit and only 34. I have more Test cricket left in me. Lately, I have been receiving some good deliveries. Then, there have been other factors. I will have my moments again for India.” 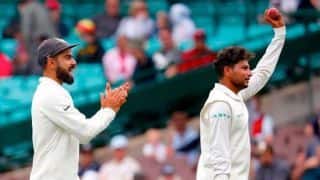