Former India women captain Diana Edulji mentioned that being one of the BCCI administrators is a huge responsibility.

Former India women captain Diana Edulji mentioned that being one of the BCCI administrators is a huge responsibility. Supreme Court on Monday nominated ex-CAG Vinod Rai, Ramchandra Guha and Vikram Limaye along with Edulji as the administrators of BCCI. The recommended members will be in charge of implementing the Lodha Committee recommendations as well as will be responsible for smooth operation of the board. According to reports, former chief justice Mukul Mudgal, cricket journalist Ayaz Memon, former BCCI chief AC Muthiah have all appreciated Supreme Court s decision, marking it as a positive step.

Edulji told news18.com, “It is a great honour that the Supreme Court thought that I am fit enough to be in the committee. It is an honour for me and also a huge responsibility on my shoulder, being the only woman cricketer (in the panel). It is going to be a very big challenge in terms of administration work to be done as the most important thing will be to give a facelift to BCCI’s reputation, which has taken a massive hit. It will be a pleasure working with Vinod Rai and Ramchandra Guha. Both are accomplished in their own fields and we will soon meet to decide on the road ahead.”

Ayaz Memon said, “There are some pleasant surprises in the appointments. The choice of Diana Edulji shows the women’s game has been given due importance,” while Mudgal was quoted as saying, I am sure this panel will do justice to the faith reposed in them.”

Muthiah, who has led the board with distinction, hailed the decision as “very good choice”.

“Vinod Rai is a man of great integrity, and he will steer BCCI to greater heights. I wish them all the best,” Muthiah opined on the matter. 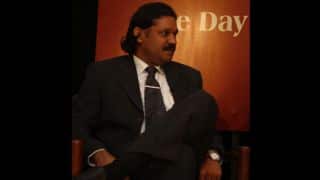