Sunday was no different as star Indian cricketer Suresh Raina celebrated his 30th birthday and Sehwag wished him in his inimitable style on this occasion.

Former Indian cricketer and now a revelation in the commentary box as well as on micro-blogging site Twitter, Virender Sehwag has a habit of lighting up birthdays and other important events of his peers lives. He has made a name for himself of late, as he wishes the current and former cricketers on Twitter in his own witty style. He uses puns as his weapons to wish the members of cricket fraternity in a rib-tickling manner. Sunday was no different as star Indian cricketer Suresh Raina celebrated his 30th birthday and Sehwag wished him in his inimitable style on this occasion. He wrote:

When people ask ,Have you seen Aaina ? (mirror)

Answer is, I have seen Raina .

Raina promptly replied to his senior player s tweet with a customary thank you note. He wrote:

@virendersehwag hahaha good one Viru bhai thanks a lot for wishes

At this point, out of nowhere, New Zealand cricketer Ross Taylor replied to the thread. He simply tagged Raina and Sehwag without adding any text to the tweet. This act prompted Sehwag to come up with a funny tweet. He wrote:

What happened Taylor ji.. Why tagging without typing. Hope stitching going on fine and you getting many orders. https://t.co/B6cnr8Y1pY

Sehwag equated Taylor with a tailor and tried to troll him on the same thread. However, Taylor came up with a solid reply in his defence, stating how that empty tweet had come up in the first place. He also cleaned up Sehwag with his sense of humour. This is what he wrote:

Taylor cleared the air on how that tweet was typed, as he wrote it was his young daughter who did so, and not him. This surely must have given Raina a d j vu moment, for his nephew had once famously posted a tweet from his account, putting his uncle in a spot of bother! In that tweet, Raina has found himself in the midst of an embarrassing situation after a tweet demeaning the Pakistan cricket team appeared on his Twitter account, which he deleted later. Well, next day, Sehwag did replied Taylor but by ignoring the daughter part and wished him to get well soon as before the second Test at Hamilton against Pakistan, he was facing some issues with vision in his eye. Taylor answered Sehwag and revealed that he will get the treatment on Wednesday.

@virendersehwag Thanks mate. Getting the op Wednesday all going well.

Sehwag being Sehwag took it to another level by taking a dig at Pakistan in his next tweet to Taylor. The Kiwi batsman scored a ton against Pakistan in the ongoing second Test, to which Sehwag replied and said, “Congratulations on the century ! You love hitting against Pakistan ,WC 2011 still fresh in our memories.” 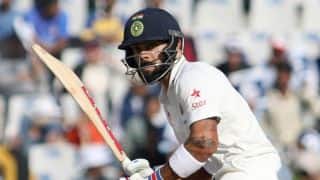