Bangladesh's new ODI skipper Tamim Iqbal has admitted that it will be an arduous task to fill Mashrafe Mortaza's shoes as a leader straight away.

Bangladesh’s new ODI skipper Tamim Iqbal has admitted that it will be an arduous task to fill Mashrafe Mortaza’s shoes as a leader straight away.

On March 8, Bangladesh Cricket Board (BCB) had named Iqbal as the ODI skipper.

“I am lucky that I have a close relationship with him. I saw him from close quarters, and we have played a lot together,” ESPNcricinfo quoted Iqbal as saying.

“I know how he thinks and I can take as much as I can. But, those are very difficult shoes to fill straightaway. I hope that I will take the positives from him. If I face trouble, he will be the first person that I will call to take advice,” he added.

The Tigers recently defeated Zimbabwe in a two-match T20 series. Bangladesh also whitewashed Zimbabwe in ODI series and defeated the side in the only Test. 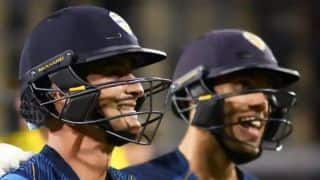