Dilruwan Perera picked the wickets of De Villiers and De Kock in the same over.

Sri Lanka were on the drivers’ seat at Lunch on Day Three with off-spinner Dilruwan Perera‘s twin strikes rocked the South African boat. The visitors hopes now hinges on skipper Hashim Amla, who is trudging along and waging a lone battle. South Africa’s centurion from the first Test, JP Duminy is giving Amla company at the other end and the duo have the responsibility of taking the Proteas to safety.

South Africa started well. Amla and Ab de Villiers did not hold back and were finding the boundary ropes at will. De Villiers’ all-round play was in full flow and Suranga Lakmal was dealt with with ease. Amla soon joined the act and brought up his half-century. Back-to-back boundaries of Ajantha Mendis started proceedings for the Protea skipper.

The duo looked solid and were playing Rangana Hearth well and it looked as if the storm had passed for the South Africans. De Villiers survived a scare when Lakmal’s short delivery found the toe end of his bat and young wicket-keeper Niroshan Dickwella took a diving catch. De Villiers was amused at the appeal and the Sri Lankans went up in arms. The decision was passed on to the third umpire and replays showed that the ball had bounced a couple of feet before the ‘keeper had pouched the ball.

It was some tight bowling from Herath and Perera that set up the wickets. The spinners stemmed the run flow and the strokemakers’ attacking talents were curbed. Perera got a hint of turn off a delivery that looked poised to go straight. De Villiers was trapped plumb in front and marched back to the pavilion after he referred it with the third umpire. It was just a hint of turn that deceived the South African talisman.

One delivery later, Quinton de Kock was outsmarted by some bounce. The delivery did not look that deadly but the ball went on to clip the off-stump. Duminy and Amla then played out the overs before lunch in ultra-defensive mode and Sri Lanka were all smiles when they walked bat to the hut. 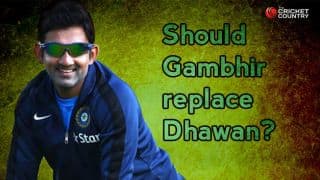