Dinesh Karthik was all over news and social media after performing heroics in India's victory over Bangladesh in the Nidahas Trophy 2018 final.

Dinesh Karthik was all over news and social media after performing heroics in India’s victory over Bangladesh in the Nidahas Trophy 2018 final. Karthik smashed last ball for a six when India needed five runs to win. He in his innings smoked 29 off 8 balls taking India home.

However, Karthik’s coach Apurva Desai is not amused by his power hitting. According to reports in gulf news they had pre-planned tactics and situations of the game.

I had a four-day training session with him in Mumbai at the D.Y. Patil Stadium soon after his return from South Africa , Desai said from Surat.

It is technical as well as tactical planning before every tournament considering what conditions he is likely to face in the tournament , he added

I am not surprised with his power-hitting. He is very sure about the areas he wants to hit the ball in shorter versions. Hence I am assuming that hitting it over covers might have been in his mind since he might be expecting a yorker outside the off stump

Desai later revealed that he was introduced to Karthik by Abhishek Nayar who helped him mentor him.

Myself and Abhishek mentor him. Abhishek wanted to resolve few areas where DK needed my guidance and that s how I became his coach .

For some games where where needs specific adjustments, I travel to the city where he is playing and do sessions before the match .

Nayar and I have been continuously working on his basic technique, scoring area and in particular, strokes for shorter versions, he concluded.

Karthik was awarded the man of the match in the final for his knock. 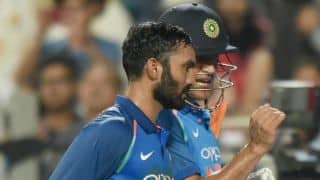 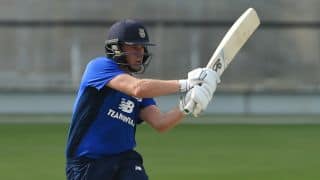