Dinesh Karthik half-century helped Gujarat Lions crawl to a below-par total of 149 for 7 against Delhi Daredevils at Rajkot.

Gujarat Lions (GL) were put into batting first by Delhi Daredevils (DD) got off to a bad start with losing as many as three wicket in the initial 5 overs. It was only Dinesh Karthik who stood tall and guided the Lions put up a respectable total of 147 for 7 against a strong bowling line-up for Daredevils. Karthik also achieved his second fifty of IPL 9, getting out on 53 from 43 balls. Karthik was ably supported by Suresh Raina and then Ravindra Jadeja where both pair added more than 50 runs to the total. Jadeja went to provide the lower order heroics managing . GL only managed to crawl to a below par total of  149 runs in 20 overs which on slow Rajkot pitch will be a handful score to defend. LIVE CRICKET SCORECARD: Gujarat Lions vs Delhi Daredevils, IPL 2016, Match 31 at Rajkot

GL started their innings on a high note accumulating as many as 14 runs in the initial overs with Dwayne Smith taking a liking to Chris Morris in the second over. Smith’s partner Brendon McCullum was a tad bit lucky as he survived a close leg-before call in the first over by Shahbaz Nadeem. McCullum did not survive much as DD skipper Zaheer Khan rattled his stumps to sent him back to the pavilion for 1. Smith followed soon as Nadeem got his first wicket, with the batsman giving a simple catch to Morris who was standing at long-on. Aaron Finch who came into bat at No.3 became Nadeem’s second wicket after been slapped for a four by him in the earlier delivery. Finch tried to manufacture a sweep giving Rishabh Pant an easy catch. Finch made 5-off 5 balls.

It was the pair of Karthik and Raina that were the saving face for GL as their team were three down for 24 runs. Raina and Karthik added 51 runs for the fourth wicket, with Karthik contributing 26 runs. Raina looked fluent in his stroke play but was deceived by a Amit Mishra beauty. Mishra who has been Delhi’s most economical and impact full  bowler, slid  the ball across Raina, who came dancing down the pitch only to miss the completely and get stumped by an ever-ready Quinton de Kock behind the stumps. Raina made a 20-ball 24.

Coming in at no.6  Jadeja finally showed some form with the bat. Jadeja and Karthik were quick to score runs against some smart bowling by Daredevils. Jadeja added runs to their partnership were he also ended by the lead contributor. Mohammed Shami picked up Karthik for 53 runs, after he completed his second-fifty of IPL 2016 with a boundary. Morris picked up the Australian all-rounder James Faulkner for 7, who got completely cleaned by him. DD would feel content to see their bowlers Morris, Mishra and Nadeem redeem themselves from the last game. It was only in the last over that Jadeja launched into Shami, hitting a six for the first ball, which helped Lions reach 149 for 7 with Ishan Kishan getting run-out of the last ball. Jadeja remained not-out on 36 from 26 balls. 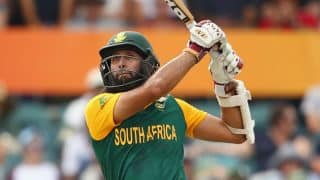