Sagar Pun, with figures of 3 for 26, was Nepal's most effective bowler.

Offspinner Sagar Pun took a career best 3 for 26 to help restrict Netherlands to 139 in the fourth and final T20I between the teams in Rotterdam. Nepal looked likely to restrict Netherlands to their smallest total in the series, as they had them 89 for 7 at a point, but big hits from Roelof van der Merwe and No.9 Michael Rippon took them to 139. LIVE CRICKET SCORECARD: Netherlands vs Nepal, 4th T20I, Rotterdam

Netherlands’ captain Peter Borren stepped up when his team’s top order looked shaky for the first time in four days. Alongside Rahil Ahmed, he put on 42 runs in 6.1 overs, before Van der Merwe’s and Rippon’s blows at the death, to enable them to provide Nepal yet another challenging target. If they win this one, they will take the series 4-0.

Nepal were frugal and effective in the early overs, taking three wickets for 26 runs in five overs. Tobias Visee, who had played as an opener in the second T20I as well, Ben Cooper, who had scored an attacking half-century in that same game, and Wesley Barresi were dismissed for single digits scores. Borren joined Ahmed in the fifth over, and got the run-rate up to over six, before they suffered a collapse, facilitated by Pun. But Van der Merwe and Rippon put on an unbeaten 56 run-stand in 51 overs to change the scenario. 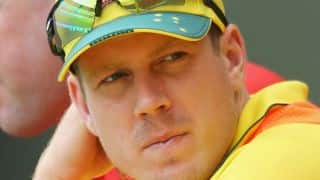