That’s it then at Durban. A David Miller-powered Dolphins unit have rocketed to the final of the Ram Slam T20 Challenge 2014 to face the Cobras. The Titans gave a good fight, but fell well short in the end. Here is the match report.

And we are back now with the Titans’ chase.

David Miller has completely annihilated the Titans bowling attack in Durban tonight. His 37-ball 93 not out has propelled the Dolphins to 200 for four at the end of their 20 overs. He hit 34 off Van Der Merwe’s 18th over. The Titans managed 129 off their last 10 overs. Miller came in the 12th over, says a lot. Read the innings report here.

. Titans have won the toss and elected to field first. Their captain, Henry Davids believes the moisture in the pitch, after heavy rain last night can help his pacers early on.   Hello and welcome to the the semi-final of the Ram Slam T20 Challenge 2014 between the Dolphins and the Titans, at Durban. We will be bringing you all the live updates from this penultimate encounter of South Africa’s premier T20 tournament this season.   The match got washed out last night due to heavy rain, but one have to credit the administrators for having the sensibility to keep a reserve day. Ideal for the fans!   The match starts at 09.30pm IST. The winner of the semi-final will face the Cobras in the final match. 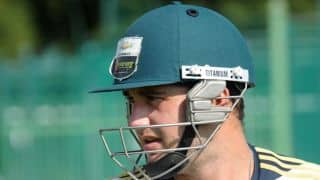