Returning from injury, with a steel bar in his arm, Maddinson scored a century during a Sheffield Shield match against Queensland.

From last representing Australia in the Boxing Day Test in 2016, Nic Maddinson s career went downhill that led to his ouster from New South Wales in 2018. Add to that, in his debut match for Victoria, he was hit on the forearm by a bouncer and X-rays confirmed that it was a fracture.

Returning from injury, with a steel bar in his arm, the 27-year-old scored a century during a Sheffield Shield match against Queensland early this week. It took him 169 deliveries to add 108, quite uncharacteristic of Maddinson, but he s happy he s got much-needed runs under his belt. “I felt like I had a scratchy 70 and then a good 30 before I got out,” he told Cricket Australia. (ALSO READ: Nic Maddinson opens up on battle with mental illness)

“(I’m) a year older, (so I) probably don’t care as much about the scoreboard or how I’m going and scoring runs. I’ve done it enough times, I feel like I can recognise those moments and just accept it a little more rather than trying to push my way through it playing the same way.”

Talking about the four-inch metal bar in his broken arm, he said: “Other guys who’ve had a similar sort of injury said it takes 12-18 months before it’s felt normal again.”

“Once I found that out, I could relax a little more and just enjoy playing. The last message I got was that it might need to come out, the bit of metal in there, in the off-season. It’s pretty rigid in there at the moment.”

Thoughts about an international return don t seem to trouble Maddinson. For now, he just wants to enjoy playing his cricket. 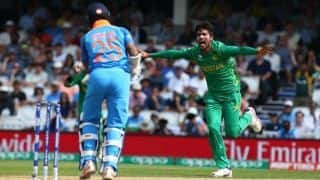 No talks with government yet on India-Pakistan ICC World Cup 2019 match: BCCI official