Hafeez, who made a comeback to the national side, said the PCB needs to fill the communication gap with senior players

Former Pakistan skipper Mohammad Hafeez on Tuesday said the senior players are not interested in just hanging around but the PCB should effectively communicate to them if they fit into team’s future plans. Hafeez, who made a comeback to the national side, said the PCB needs to fill the communication gap with senior players.

“I think senior players after the years they have played for Pakistan should be informed properly if they are in the plans of the national team management so that they can take better decisions on their future,” said Hafeez in Lahore. “It would be easier for the players if a communication policy is framed on matters of selection or non-selection of senior players.”

Hafeez, 39, who made a delightful 67 not out in the second T20 international against Bangladesh on Sunday said he was happy to be recalled to the Pakistan team after being sidelined since the World Cup.

“It was good to come back and get runs and it just pumped up my confidence even more that I can still add value to the team,” he said.

Another former captain and senior player, Shoaib Malik was also recalled for the Bangladesh series after being ignored since the last World Cup in England. Malik also scored a half century in the first T20 match in Lahore to give Pakistan a hard-fought win.

Hafeez, who is also due to appear for a bowling assessment test at the LUMs university biomechanical lab on Wednesday in a bid to have his bowling action cleared said, he was confident he would come through.

“I would like to contribute as a batsman and bowler to the Pakistan team and I am very confident I will clear the test because I don’t see any major problems in my bowling action.”

Hafeez was stopped from bowling while playing in UK’s T20 blast last year after officials reported his bowling action as illegal. Hafeez said it was great to be playing back in Pakistan.

“For ten years we played our Test and other matches in UAE or other places and it is good we have returned to Pakistan and can play in front of our home crowds,” he said.

But he felt that quality of pitches for home international matches need to get better, noting that tracks for the T20 series against Bangladesh were below par. After Pakistan won the first two matches, the third was washed out due to rain on Monday.

Bangladesh will return to Pakistan next month for a Test match in Rawalpindi. 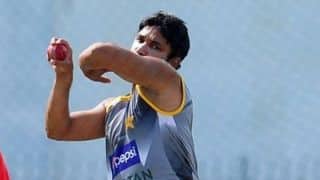