A child-like enthusiasm for the game is the reason why Sachin Tendulkar has completed over two decades in international cricket despite the pounding that his body has taken, feels his long-time teammate Rahul Dravid. 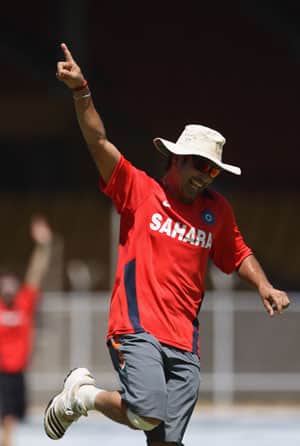 A child-like enthusiasm for the game is the reason why Sachin Tendulkar has completed over two decades in international cricket despite the pounding that his body has taken, feels his long-time teammate Rahul Dravid.

“Sachin’s longevity comes down to the joy that he still gets from playing. After 20 years of international cricket he still has a child-like enthusiasm. That’s not an easy thing to do when you have been travelling and playing so much and your body has taken a pounding,” Dravid said in the latest edition of ‘Wisden Cricketer’ magazine.

“He is great at preparing for games. Not only in terms of his skills but also getting his mind right. What he has achieved is mind-boggling. He is constantly setting the boundaries for the future generations. His batting has changed with time — with his body and age.

Everytime he has changed he has been successful. He hasn’t seen too many bad patches in his career,” he added.

Dravid was not the only one paying tribute to the 38-year-old batting icon, who is just one short of his 100th international ton.

Five former England captains, including the Ashes-winning Michael Vaughan, revealed how the diminutive right-hander tormented and mesmerised them in equal measure in the same magazine.

Nasser Hussain, who captained England in the 2001-02 series against India, said Tendulkar has made some adjustments to his strategy over the years.

“Technically and mentally Sachin has changed little over the years but he has changed his game plan. He began as flamboyant, extravagant stroke-maker who had all the shots and simply loved the game. Once the records and the hundreds started to be racked up, he turned into a run-machine,” Hussain said.

“There are two types of cricketers; there are guys like myself and Mike Atherton who played the game because that’s what we did; there are players like Graham Gooch and Alec Stewart who have the game in their blood, who would be lost without the game.

“Sachin is in the second group and i suspect the dip in form he had a few years ago was because he became fearful of life after cricket. He is not driven by money, he is driven by batting,” he added.

Hussain recollected the incident when Tendulkar called him up to get advice on his tennis elbow problem.

“It was bizarre; what was arguably the greatest batsman of all time ringing me about?”

“Sachin is a different player now from 2007. The best players in the world change little things about themselves to keep themselves in the game. In the last two years, he has become more aggressive, he’s gone back to his old way of trying to score when for a period he tried to survive.

“(Chris) Tremlett bowled well against him in 2007 and he is a miles better bowler now. But Sachin doesn’t have any weaknesses although every batsman is vulnerable on and around the off stump early on. England might go aggressive at him, test him with a few short balls — I have seen people do that over the last few years and it hasn’t affected him,” he said.

Andrew Flintoff, the talismanic all-rounder who was instrumental in guiding England to the Ashes title in 2005, said he craved for Tendulkar’s respect whenever he bowled at him.

“…with Tendulkar, when I bowled to him, I actually wanted him to respect me. I hold him in such high esteem and he is such a good player, I want to make it hard for him. I want him to walk off that field thinking that Flintoff is a good player, he can bowl. I want to impress him,” he said.

Graham Gooch, who captained England in the series against India in 1990 and 1992-93, said even at the start of his career, Tendulkar came across as a seasoned player.

“No one had ever seen him in 1990. As a 17-year-old it was evident that the lad had great skill, great balance, great timing, an eye for the ball. You could see he had all the attributes to make a top player,” he said.

“For one so young he had a poise and composure about his batting. You don’t often get that in young players; you get the talent and the stroke-making but poise, authority and composure normally come later. He has the ability, like all great players to adapt to the conditions. That’s the skill of a batsman. You don’t play the same way every time,” he added.

“One of the most remarkable things is that he has hardly changed at all — exactly the same set-up. He has trusted in his technique and power all this time. He has stayed true to his game.”

Zaheer to be rested, Harbhajan might be dropped for ODIs