Ireland won just two of the nine matches they played when they toured India to play three T20Is, five ODI and one Test against Afghanistan earlier this year and would be eager to even the odds now that it’s their turn to play hosts. The first of the two ODIs will be played in Belfast with both team keen to draw first blood. 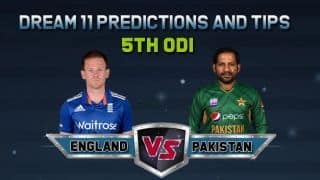 Dream11 Prediction: PAK vs ENG Team Best Players to Pick for Today’s Match between Pakistan and England at 3:30 PM