The Delhi capitals face Royal Challengers Bangalore in Match 46 of the IPL today and while one team is within striking distance of securing a playoff berth, for the other, the agenda is to stay alive in contention for it.

DC captain Shreyas Iyer won the toss and elected to bat first. Moeen Ali has gone back home and in comes Shivam Dube. Tim Southee also misses out, so does Akshdeep Nath. Heinrich Klassen and Gurkeerat Singh Mann get a game for RCB. For Delhi, Sandeep Lamichanne in for Chris Morris

DC vs RCB PREDICTION: While DC are almost certain to make it to the playoffs, unless a chaotic last three games, and the other permutations and combinations spoil the party, this game is yet another must-win game for Kohli and Co. as they aim to keep their playoffs hopes alive

So which team will gain in tonight s game? Will RCB add DC in their list of franchises whose party they ve spoiled or will Shreyas Iyer-led DC improve their record at the Kotla and become the second team after CSK to make it to the final four?

The last time the two teams squared off, on April 7, the Capitals won by four wickets at the Chinnaswamy Stadium.

Match 46 of IPL 2019 is between Delhi Capitals and Royal Challengers Bangalore is at the Feroz Shah Kotla stadium in Delhi.

Player to watch out for: Virat Kohli 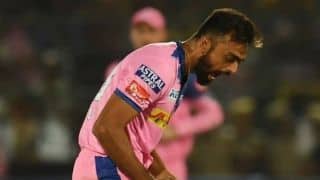 I can't really express how much I needed this performance: Jaydev Unadkat