Dream11 Team Prediction Sri Lanka vs West Indies 2nd ODI – Captain, Vice-Captain, Fantasy Tips For Today’s Match SL vs WI at Hambantota: In the second match of the three-ODI series, Sri Lanka will take on West Indies in another exciting battle of cricket at the Mahinda Rajapaksa International Stadium, Hambantota on Wednesday (February 26). With the familiarity of conditions and the confidence of a hard-earned win, the hosts Sri Lanka will start as favourites for the contest. But fortunately for West Indies, despite coming up short in the series opener, they had plenty of positives to take from the game.

West Indies’ batting would largely please them, despite the failures of the middle order, with most of the top four coming good, before the lower order showed a lot of grit in laying the finishing touches to an innings that had lost significant steam. Meanwhile, Sri Lanka dalso id a lot of things right, most notably the number of contributions they received from all around the batting order. However, the key for them would be to retain that level of consistency and seal the series something they haven’t been quite adept at doing in the recent past.

TOSS – The toss between Sri Lanka and West Indies will take place at 2 PM (IST). 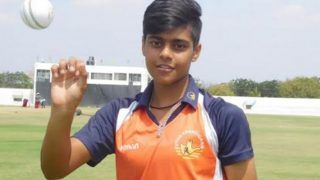 If You Get The Wicket of a Boy, it Will Shut Them Forever, Says 16-Year-Old Kashvee Gautam After Claiming All 10 Wickets in an Innings