Rahul achieved his century in the 38th over with a single on the bowling of Piyush Chawla.

South Zone powered there way to 210 for one at tea on the second day of the Duleep Trophy final played at Feroz Shah Kotla, New Delhi on Thursday.

The spin duo of Murtaza and Piyush Chawla were not effective on the Kotla track. The ball did nothing and it was too easy for Uthappa and Rahul to play freely.  The run-rate which was less than four before the lunch break had carved past six as they they both launched an array of effective shots. Ishwar Pandey who also came back for an extra spell in between also went for plenty of runs before he was removed.

The 100 came up in the 24th over soon after Uthappa also got his half-century. The most striking part of Rahul’s innings was his footwork. He was too quick to change his stance and pick the short ones from the bowlers. Not only did he play those straight bat drives, back foot crunches but also used the reverse sweep effectively. South Zone had gathered 74 runs from 12 overs as the score colcked 139 at the end of 30 overs.

The breakthrough finally came when Jalaj Saxena dismissed Uthappa on 80. Saxena bowled a tossed up delivery which went past Uthappa’s bat and hits him right in front of the stumps. Baba Aparjith joined Rahul in the 35th over.

Rahul achieved his century in the 38th over with a single on the bowling of Piyush Chawla. This was his fifth hundred in first-class cricket. 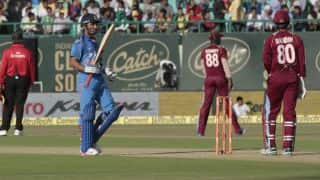