Duleep Trophy 2017-18 final is being played at Ekana International Cricket Stadium in Lucknow.

An entertaining first day’s play of Duleep Trophy 2017-18 final came to an end with India Red in a commanding position at 317 for 5 in 83.3 overs. Opting to bat, Red dominated the proceedings for maximum period on a dry surface. Hundreds from Prithvi Shaw and Dinesh Karthik have taken Red to a good platform, but they would need a fitting contribution from their lower order on Day Two. Shaw and Karthik were involved in a 211-run stand before Bhargav Bhatt’s 3-for initiated a mini collapse at stumps.

Resuming the final session at 203 for 2, Shaw and Karthik carried on in similar fashion. Shaw was brilliant in what was his Duleep Trophy debut and took on every bowler. It was an aggressive innings with sheer power and timing. Karthik, on the other hand, got going soon. He matched 17-year-old Shaw and dealt in boundaries, 12 fours to be precise. His strike rate read 71.61. The duo held their ends till the fag end of the day before Akshay Wakhare trapped skipper Karthik. He tried to work the ball towards leg-side, missed it and was plumbed. Shaw followed suit for 154 to Bhatt.

The last wicket of the day was Baba Indrajith (4). Ishank Jaggi remains unbeaten on 9, and will hold fort for India Red on Tuesday. On the other hand, Suresh Raina and co. have will like to wrap up Red’s innings under 400. 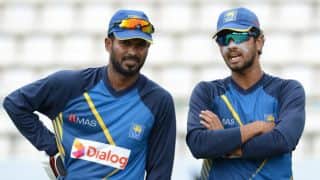