The opening day of the second match of Duleep Trophy 2017 turned out to be a roller-coaster ride for India Red as they put up 291 for 9 against India Blue. On Wednesday at the Green Park Stadium, Kanpur, India Red won the toss and opted to bat. They were off to a stable start with the openers putting up a fifty-run stand. However, the India Blue bowlers pulled off a comeback, bagging 6 wickets in the second session, putting India Red under pressure. Finally, it was Baba Indrajith s single-handed heroics that put the India Red back on track in hunt for their second victory in the tournament.

India Red undoubtedly had big hopes lying on Priyank Panchal after his spectacular efforts in the first match, when he hit tons in each innings. However, he was restricted to 36 by Ankit Rajpoot. That was the only wicket India Red lost in the first session, in which they put up 73. The following session belonged to India Blue who, led by Rajpoot, ran through the Reds middle-order. Indrajith resisted stubbornly to survive the session, emerging as his side s only hope of a turn around.

Coming back from dinner, Indrajith single-handedly anchored the innings. He batted with the tail-enders, who kept on throwing their wickets regularly, to gradually get to his half-century as India Red crawled to the team score of 200.

Indrajith finally found support from last man Vijay Gohil, who came out to bat at 205 for 9. They showed great coordination together. Indrajith increased his scoring rate and reached his second fifty quickly. He remained unbeaten at 120 with Gohil at 22 at stumps.

Rajpoot s 3 for 44 were the best figures for India Blue so far, while Jaydev Unadkat bagged 2 for 64. 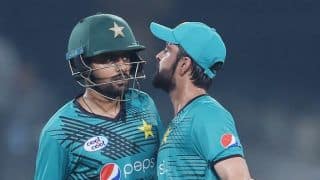