India Blue were off to a steady start. They were 93 for 1 at one stage with Bengal batsmen Abhimanyu Easwaran and Manoj Tiwary going strong.

On a track with considerable amount of turn, teenager Washington Sundar crafted a brilliant 88 for India Red and helped the side built on the momentum that was earlier set by the centuries from Prithvi Shaw and Dinesh Karthik. India Red reached 483. The heroics did not end there. With his intelligent off-spin, he sent back India Blue skipper Suresh Raina and his Under-19 World Cup skipper Ishan Kishan, to keep them reeling at 181 for 5. India Blue now trail by 302 runs.

India Blue were off to a steady start. They were 93 for 1 at one stage with Bengal batsmen Abhimanyu Easwaran and Manoj Tiwary going strong. In a span of 44 balls, they lost Tiwary, Raina, Deepak Hooda and Kishan.

Easwaran has been rock steady at one end, playing beautifully on 87 off just 123 balls. With him in company is Jaydev Unadkat who is unbeaten on 27. The duo have added an unbeaten 58 for the sixth wicket.

Sundar will cherish Raina’s wicket for long. It was a classical off-spinner’s wicket as he induced Raina to step out for a drive, beat him with flight and turn; captain Karthik made no mistake behind the stumps.

The other star for India Red on Day 2 was left-arm spinner Vijay Gohil. He added a crucial 27 with the bat and then wrecked the Blue middle-order, dismissing Srikar Bharat, Tiwary and Hooda.

On a surface that already looked a fourth-day track ahead of the second day’s play, the Raina-led Blue are staring at a defeat. Senior bowler Ishant Sharma did not threaten enough, and they allowed Red to score far too many runs, and the dropped chances did not help either. A monumental task awaits Easwaran and co. on Day Three, but stay tuned; this is a funny game. 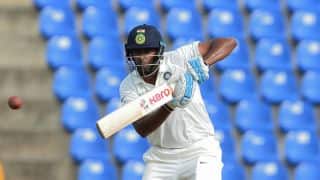 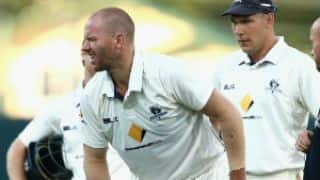