The second day of the third Duleep Trophy 2017 was washed out without a ball being bowled. At Green Park Stadium in Kanpur, India Blue lead by 77 runs. They had reduced India Green to 100 for 3 before stumps on the opening day. Manprit Juneja, who remained unbeaten till stumps on the opening day, will continue batting if weather permits to play on Thursday. READ: Raina upset with UPCA s arrangement after wet outfield wastes a day

India Green restricted India Blue at a low score of 177. Manoj Tiwary and Suresh Raina were the only two batsmen who put up some mentionable runs on the board, but the rest of the batting failed miserably. Aniket Choudhary struck early to unsettle the India Blue top-order, while Parvez Rasool s 5 for 70 did not let the middle-order contribute with runs.

Earlier, India Blue had lost a day s play as they faced India Red in the second match of the tournament. The unplayable conditions created by wet outfield cost the teams two sessions, which skipper Raina was confident their side could have won.

Currently, India Blue are at the second position of the points table, with 3 points from first-innings lead in the second match while India Red sit on top. India Green have not secured any points yet. 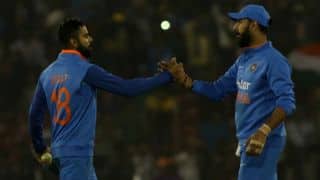