After a shaky start, India Blue were revived by experienced duo Suresh Raina and Manoj Tiwary at tea on Day One of Match No. 3 of Duleep Trophy 2017 against India Green.

After a shaky start, India Blue were revived by experienced duo Suresh Raina and Manoj Tiwary at tea, on Day One of third Duleep Trophy 2017 match. India Blue, who have 3 points from their drawn last match, lost both their openers within the first six overs. Tiwary and Raina held fort, playing with a lot of patience and putting up a strong partnership. At tea, India Blue are 92 for 2. Duleep Trophy: Suresh Raina upset with UPCA s arrangement after wet outfield wastes a day

Winning the toss, Raina opted to bat first. Sumit Gohel and Srikar Bharat opened batting for India Blue but could not provide the start their team wanted. Gohel was the first to depart, as he scored a solitary run, giving a catch to Kaushik Gandhi in the very second over, off Aniket Choudhary. Tiwary joined Bharat at the crease and put up a failed attempt to build a partnership. Choudhary struck again, removing Bharat for 10. India Blue were left reeling at 16 for 2 when Raina came out to bat. He built innings first stable partnership with Tiwary.

Both put in all their experience to take the team past the score of fifty. Tiwary accelerated the scoring rate past that, as he remained unbeaten at 48 before tea, hitting 8 fours and a six in the process. Raina, unlike his usual aggressive nature of batting, took a step back to let Tiwary play his cricket as he scored 30 with the help of 3 fours. Losing two wickets, India Blue scored 92 runs in the session.

Choudhary was the only successful bowler for India Green in the session with 2 for 9. 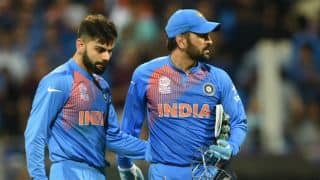