A senior BCCI official said the decision to scrap pink balls save the final has been done keeping bigger picture in mind.

The season-opening Duleep Trophy, which has been India’s only day-night first-class tournament with pink ball for the last three seasons, is set to go back to the day format with red ball due to lack of TV coverage.

The blue-riband tournament, which will feature India’s top domestic stars, will be played from August 17 to September 9 at Bengaluru’s Chinnaswamy Stadium.

However, the BCCI’s GM (Cricket Operations) Saba Karim confirmed that save the final from September 5-9, which will be telecast live on Star Sports, all the other matches will be traditional red-ball games like the old times.

“We have floodlights at the Chinnaswamy but we are not playing with pink ball under lights as there is no live coverage. Only the final match will be a day/night affair as that’s the only match to be aired live” Karim informed on Tuesday.

Asked if this will be a roadblock in moving towards pink ball Tests in future, Karim disagreed.

“I don’t think so. If everyone associated with Indian cricket is on the same page, maybe we can think of having India A first class games with pink balls. I am not saying anything is confirmed but you never know if everyone comes on same page,” Karim said.

However, a senior BCCI official said the decision to scrap pink balls save the final has been done keeping bigger picture in mind.

“So, what’s the logic of our supply line of players playing a tournament with pink ball when they are in any case going to play red ball cricket if selected for India,” he said.

On the three Duleep squads formed, most of the current India A players along with performers from Vidarbha and other Ranji teams have got a chance.

The likes of Abhimanyu Easwaran, Anmolpreet Singh, Ruturaj Gaikwad, Shreyas Gopal, Jayant Yadav, Axar Patel, all of whom have played at least one format for India A in the West Indies A tour, are there.

Others like Karun Nair and Varun Aaron are also in the mix just like last season’s highest run-scorer Milind Kumar of Sikkim or talented left-arm seamer from Rajasthan Tanveer-ul-Haq. 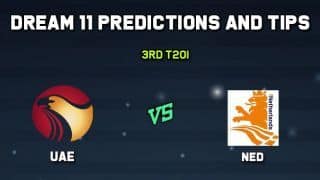