With nine wickets in hand, South needed only 117 runs to win the final on the fifth and final day but Central bowlers triggered a dramatic collapse to win the game by nine runs.

“We could have done much better. Losing nine wickets for 99 runs was poor batting from our side. We batted badly. Scoring 100-odd runs should not have been that difficult. Our middle and lower-middle order didn’t play well. We all are feeling bad. It is a good learning lesson for all of us,” a dejected Vinay said.

While giving credit to Central bowlers, the 30-year-old right-arm medium pacer refused to blame the Kotla pitch that was slightly on the slower side on the last day.

“The wicket was good though it was keeping low. But it was alright considering it was a fifth-day wicket. We should have played more positively. Credit goes to their bowlers who bowled in the right areas to put pressure on our batsmen,” Vinay, who is also the captain of the Karnataka team, said.

Vinay (24) said Pankaj Singh’s double strike — the Rajasthan medium pacer removed overnight centurion Lokesh Rahul (130) and wicketkeeper-batsman Dinesh Karthik (0) in an over — was the turning point of the match.

“Those two wickets by Pankaj brought them back into the contest. Also my wicket was crucial. Had I been there longer, things could have been different.” 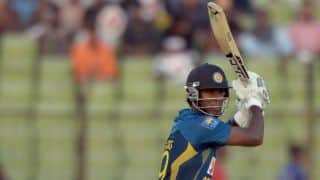