Yet another day of the third match of Duleep Trophy 2017 between India Green and India Blue was abandoned due to unplayable conditions at Green Park Stadium, Kanpur.

Yet another day of the third match of Duleep Trophy 2017 between India Green and India Blue was abandoned due to unplayable conditions at Green Park Stadium, Kanpur. On the opening day, India Green had restricted India Blue to 177 and later scored 100 for three. They are now left with just three sessions on Day Four to bag the crucial points.

India Blue won the toss and elected to bat. They went through a batting collapse, with Manoj Tiwary (78) and Suresh Raina (40) scoring the most of runs. India Green s Aniket Choudhary (3 for 18) and Parvez Rasool (5 for 70) ran through their opponents batting line-up.

India Blue earned 4 points for getting first-innings lead in their last drawn match against India Red. They are at the second position of points table, while India Green follow them at No. 3, with no points earned yet.

Earlier, India Blue had lost a day due to wet Kanpur outfield in the match against India Red, which left Raina unhappy.

Whatever happened, for the lack of facilities or the lack of initiative by the UPCA CEO, he (Deepak Sharma) has to take the initiative and give us a proper channel. You can t just say something and expect something. They have to be very professional from their side as well. We re here to play Duleep Trophy and Duleep Trophy has been a very important tournament for so many years. It s important to take this seriously. We didn t have a proper game, that was the sad part, said Raina after the second match. 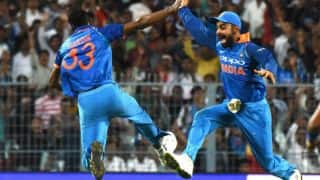 India No. 2 in ODIs despite having same ratings as South Africa: Here’s why