Duleep Trophy, India Red vs India Blue: India Red ahead by 179 runs with seven wickets in hand going into

India Red captain Abhinav Mukund scored a well-fought 50 in the second innings before getting lbw to Ricky Bhui. His knock included nine fours.

India Red secured a vital first innings lead against India Blue on the third day of the Duleep Trophy match at the NPR College ground in Dindigul. Delhi batsman Dhruv Shorey missed out on a century as he fell short by three runs to Parvez Rasool. Shorey’s innings consisted of nine fours and a six.

India Blue lost three wickets in the space of 20 runs after they started the day at 183/5. A 61-run stand for the eighth wicket between Jaydev Unadkat and Dhawal Kulkarni raised hopes of a lead for India Blue. However, Karnataka pacer Abhimanyu Mithun sent back Unadkat and Akshay Wakhare (0) in the space of three balls to peg back India Blue.

The last wicket stand of 33 between Kulkarni and Ayyappa ensured that the lead for India Red didn’t extend to more than 23 runs. Rasool was the best bowler for India Red, picking up 4 for 107 from 36 overs while Rajneesh Gurbani, Mithun and Aparajith had two scalps each.

Siddhesh Lad, 47 and Wadkar, 30 are on the crease as India Red ended the day at 156 for 3 which means they are ahead by 179 runs with seven wickets in hand going into final day. 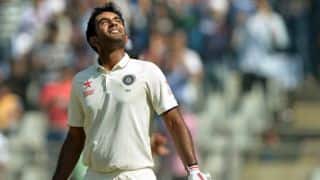 Jayant Yadav out of Quadrangular series with a side strain 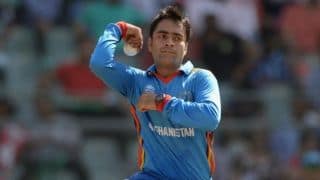