Delhi batsman Dhruv Shorey (86*) showed determination as India Blue struggled to 183/5 at the end of day two in their Duleep Trophy tie against India red at the NPR College ground in Dindigul. Shorey represented Chennai Super Kings in this year’s IPL and proved his skills in the long format after India Red bowlers had his team at 18/3 at one stage.

Paceman Rajneesh Gurbani, who starred in Vidarbha’s maiden Ranji Trophy triumph last season, took two of the first three wickets to fall to peg India Blue back. He dismissed Bengal left-hander Abhishek Raman (26 balls, 2X4) in the sixth over and later sent back the talented Anmolpreet Singh (1) to leave India Blue at 18 for 3. Shorey and Andhra batsman Ricky Bhui put on 112 runs for the fourth wicket in an enterprising display of batting.

Earlier, India Red resumed proceedings on day two from their overnight score of 256/4. Siddhesh Lad who batted excellently for 83* yesterday could add only five more runs to his individual score before falling to Bandaru Ayyappa. India Blue could add only 60 runs for their last six wickets and folded up for 316.

Left-arm spinner Saurabh Kumar and Akshay Wakhare finished with three wickets each while Ayyappa and Jaydev Unadkat had two scalps each. India vs England: Mayank Agarwal happy with his form, despite missing out on India call-up 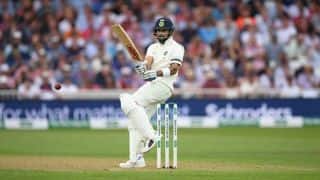