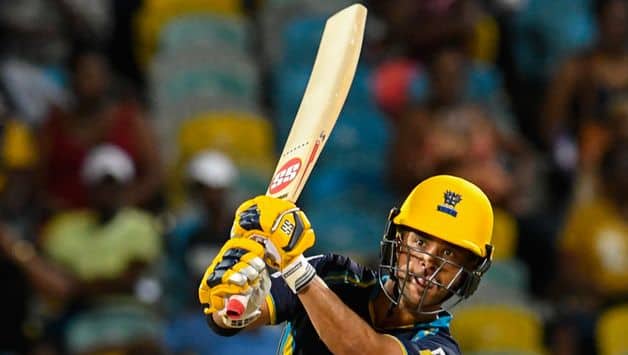 A sensational display of sustained hitting from JP Duminy and a superb bowling effort from Hayden Walsh Jr allowed Barbados Tridents to end their eight-match losing home streak in the ongoing Caribbean Premier League (CPL) in style as they beat defending champions Trinbago Knight Riders by 63 runs on Thursday.

Duminy blasted the fastest ever CPL half-century before Walsh Jr took three wickets in four balls on his way to the first five-wicket haul of the season as the Knight Riders came up well short in their pursuit of the Tridents’ 192/5.

Tridents had been given a solid platform by openers Johnson Charles and Jonathan Carter, both men passing 50 in a first-wicket stand worth 110. But they took almost 14 overs getting those runs and, when both openers and then Alex Hales all fell in quick succession, the Tridents innings appeared to be falling away.

Perhaps the most astonishing element of Duminy’s innings is that he had only 3 to his name after the first five balls he faced. From that moment he faced 15 further deliveries. The 15th dismissed him. The second was bunted down the ground for a scampered two. The final balls of the 18th and 19th overs were deliberately knocked away for singles to retain the strike. The other 11 were sent to or over the boundary. There weren’t many mishits in there. Short balls, full balls, slower balls. All got the same treatment. The seven sixes all cleared the boundary with something to spare.

Ali Khan’s third over went for 24 his three-over spell cost him 51 in all; James Neesham’s only over cost 25. In all, 76 came from the last five overs of the innings as the innings was brought dramatically back to life after the disappointment of the three quick wickets.

Carter’s half-century, his first in the Hero CPL, will certainly not live as long in the memory as Duminy’s but having been promoted up the order he did the job asked of him in providing a base from which his team-mates could launch with his 46-ball 51.

Charles was more fluent in his 58 from 39, striking the ball crisply and collecting eight fours.

But ultimately this was an innings about one man, even if he was only actually batting for around a quarter of it.

And he wasn’t finished. The Knight Riders had made a lightning start to their chase of 193 for victory despite losing openers Lendl Simmons and Sunil Narine to Harry Gurney and Jason Holder respectively.

Colin Munro had flown to 23 from 12 when a rare miscue sent the ball high into the sky but over the backpedaling Holder at mid-off.

While everyone else watched to see whether Holder could get back for a catch, Duminy screeched fully 40 yards around the boundary edge before diving and coming up with the ball to complete a stunning catch.

Walsh Jr then started his own contribution to the Tridents’ success as he bowled Denesh Ramdin for 11 from 14 balls.

Pollard, Neesham and Seekkuge all fell in his second over to leave the Knight Riders reeling at 83/7 and out of the contest, while Walsh Jr had the amazing figures of 2-0-4-4.

Darren Bravo took a four and a six off the leg-spinner to slightly dent those figures, but Walsh Jr was not to be denied for long. He teased Bravo into a miscue outside off stump to secure his fifth wicket and spark wild celebrations around the Kensington Oval.

For all Walsh Jr’s brilliance, it was still fitting that the final word should go to Duminy and sure enough he finished off a remarkable night’s work by dismissing Khary Pierre and Ali Khan to wrap up a thumping win that lifts the Tridents above St Lucia Zouks into the final playoff spot.

The Knight Riders remain second despite having now gone three matches without a victory after winning their first four. 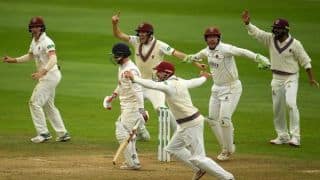 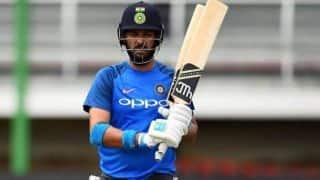