Duncan Fletcher's contract as India's cricket coach was on Friday extended by one more year despite a below-par track record, setting to rest the intense speculation on his future. 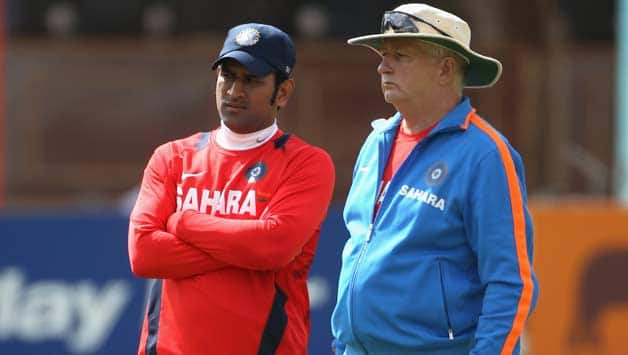 Duncan Fletcher‘s contract as India’s cricket coach was on Friday extended by one more year despite a below-par track record, setting to rest the intense speculation on his future.

The decision to renew the 64-year-old Fletcher’s contract, which was due to end at the end of this month, was taken by the BCCI’s Working Committee which met here on Friday.

“The working committee decided to extend Fletcher’s contract by one year. Since he has been with the team for two years, we don’t want to take a knee-jerk reaction considering the next big Test series is in South Africa. It will be risky and unfair on a new coach to give him charge in South Africa and expect good results from him,” said a senior BCCI member.

Speculation were rife about Fletcher’s future after he had lost 10 Test matches including a home series against England recently apart from ‘whitewashes’ in England and Australia.

Under Fletcher, India had lost 10 out of the 22 Test matches before the ongoing match in Mohali having won only eight. The only away Test win was against West Indies nearly two years back just when Fletcher had taken charge.

In the 44 ODI matches played by India post their World Cup triumph, the ‘Men in Blue’ have won 25 matches losing 16.

There were two tied matches and one match did not yield any result.

In T20s, India won nine of the 17 matches losing the other eight.

India have not qualified for the Asia Cup final and also couldn’t make it to the last four in the ICC World T20.

Legendary opener Sunil Gavaskar questioned Fletcher’s extension but said he should get the backing since he has now been re-appointed.

“I wonder whether an Indian coach would have survived after 10 Test defeats,” Gavaskar quipped.

The Indian players have had high regards for him as a person with a great technical acumen but as far as strategy is concerned, he has been more of a backroom character.