Besides the two matches, the itinerary will also boast of a scenic tour of the Swiss local and a gala dinner where the fans will get a chance to meet their favourite cricketers.

The unique two-day event is set against the serene and breathtaking backdrop of the Swiss mountains which will host two matches in two days. The lake freezes into an extremely thick layer of ice which then gets covered by the soft falling snow, enabling the lake to withstand more than 200 tons of weight, which makes it the perfect area to construct a pavilion village and grandstands to watch and support the festivities. The cricketers have been divided into two teams – Badrutt’s Palace Diamonds and Royals.

Besides the two matches, the itinerary will also boast of a scenic tour of the Swiss local and a gala dinner where the fans will get a chance to rub shoulders with their favorite cricketers. The event is a joint initiative of Vijay Singh, CEO, VJ Sports and Akhilesh Bahuguna, Director, All Spheres Pvt Ltd.

“We are delighted to have Dwayne Bravo and Abdul Razzaq as the newest additions to Team Royals. Both have a very good fan following and the crowd at the stadium and elsewhere will have a great time watching their favorite players battle it out in the snow,” said Bahuguna.”I am particularly happy about Bravo joining the ranks as he becomes the first from West Indies to do so. We are surely going to get enthralled with the Caribbean spirit.”

Vijay Singh, CEO, VJ Sports added: “Everyone remembers the nail-biting matches when Virender Sehwag used to bat against the likes of Dwayne Bravo and Abdul Razzaq. We are all set to recreate history and are really excited to see all these legendary players once again take on the challenge and give their fans a lot to cheer about.”The unique aspect is, of course, the 22 yards giving way to snow rather than the usual soiled one.”

Players will use the traditional cricketing gear including the red-ball but will wear sports shoes instead of spikes. The matches will be played on a matting pitch. PCB threatens to pull out of Asia Cup 2018 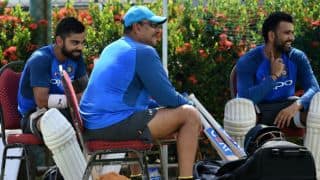