He is an acclaimed T20 freelancer but having plied his trade in the shortest format across continents, Dwayne Bravo has safely concluded that there is no franchise better than Chennai Super Kings, which has used Right To Match card to retain him. From Trinbago Knight Riders to Essex, Lahore Qalandars to Melbourne Renegades, Bravo is a T20 franchise’s delight with his multiple skills of power-packed batting and bowling during death overs.

“Personally, it (CSK) are the best franchise that I have ever played for and I am looking forward to it and meeting up with our captain MS Dhoni, Suresh Raina, (Ravindra) Jadeja and also to the newcomers who are now going to be new members of our family,” Bravo told CSK website.

“Harbhajan Singh, Ambati Rayudu (he played with them for MI) to just name a few guys who are going to join us and wear the Yellow jersey… can’t wait!. I am happy, blessed and honoured to be retained by the Chennai Super Kings,” Bravo added.

The Trinidad cricketer was retained by CSK after the franchise exercised the Right to Match card at INR 6.40 crore at the player auction held in Bengaluru recently. “I am very happy and excited to be back in Yellow. To all our CSK fans eagerly waiting… this IPL we are back,” Bravo added.

Bravo turned out for CSK between 2011 and 2015, scoring 706 runs and taking 79 wickets. He also said the Super Kings’ return to the IPL is a big one, a moment that a lot of people were waiting for.

“The return of CSK to the IPL is a big one, a special one, a moment that a lot of people were waiting for,” said Bravo, who bagged the Purple Cap for most wickets in 2013 and 2015. He also said CSK was one of the most successful IPL franchises and the League never had the desired impact as it was absent for the past two years.

“Chennai Super Kings are one of the most successful franchises in IPL history. Definitely, IPL without Chennai Super Kings, it didn’t have the same impact it had in the previous years,” the Caribbean cricketer added. 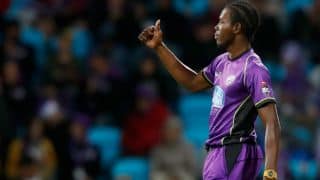