West Indies' Dwayne Bravo risked disciplinary action after criticising officials for the "game-changing" decision to give Chris Gayle out in the second One-Day International against England at The Oval. 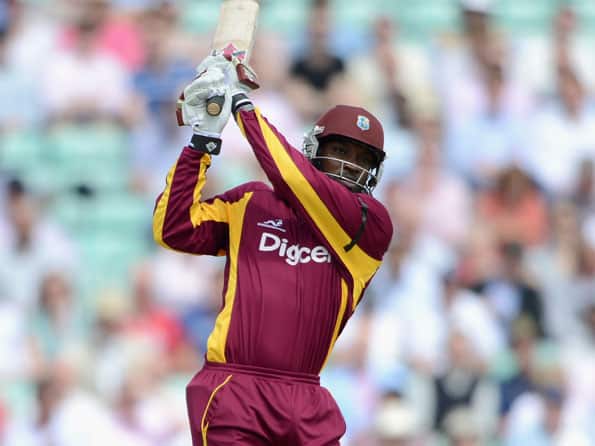 West Indies’ Dwayne Bravo risked disciplinary action after criticising officials for the “game-changing” decision to give Chris Gayle out in the second One-Day International against England at The Oval.

Opening batsman Gayle had made 53 in just 51 balls, with five sixes and three fours, when he was given out lbw to off-spinner Graeme Swann by New Zealand umpire Tony Hill here on Tuesday.

The 32-year-old left-hander immediately asked for a review of the decision.

It seemed a close call either way as to whether the ball had hit the bat or pad first but the upshot was that Gayle’s dismissal sparked a collapse that saw the West Indies decline from 63 without loss to 79 for four.

Bravo, who top-scored for the tourists with 77 and shared a stand of exactly 100 with Kieron Pollard, helped get the West Indies to 238 for nine.

But it never looked like being enough as a century from England captain Alastair Cook saw the hosts to an eight-wicket win with five overs to spare and an unassailable 2-0 lead in this three-match series following last weekend’s 114-run success at Southampton.

Afterwards, all-rounder Bravo was adamant the umpires had got it wrong in giving Gayle out.

“What confused us is they used the technology, and then the decision was given,” he said.

“It’s okay, umpires do make mistakes — that’s accepted — but not when they see the referral as well and realise they’ve made the wrong decision and then stand by it.

“It was a game-changing moment, and it was always difficult then to get a big total. If the decision had gone a different way, it might have been a different ball game.

“We lost our way in the middle there. Pollard and I fought our way back, but we were not in a position to have the firepower to finish off the innings.” (AFP)

Chris Gayle: Good to be back to international cricket