Bravo has hinted he may want to play against for West Indies a year after he announced his retirement from international cricket. More than a year after announcing his international retirement, former West Indies allrounder Dwayne Bravo has hinted he may want to play against for the country. Bravo, who retired from international cricket last October, hopes to make a comeback now that there’s been a change in guard at Cricket West Indies (CWI) and team management. He last played a match for West Indies in September of 2016.

When asked by a reported of Maratha Arabians during the Abu Dhabi T10 league about whether he plans on ending his international exile, Bravo commented: “Hopefully.”

This isn’t the first time Bravo has provided signs of wanting to return. Last week, he put up a video on Instagram TV, where he said: “As a former West Indies player, but [I] may soon come out of [international] retirement…anyway.”

Bravo will be turning up for Maratha Arabians joining former India batsman Yuvraj Singh. This will be Bravo’s first match since the Canada T10 League, at the completion of which, he underwent a finger surgery. Because of the injury sustained to the middle finger of his right hand, Bravo missed the entire Caribbean Premier League but is fit in time to represent the Arabians in the Abu Dhabi T10 League.

“I bowled a few balls after a long time, after two and a half months, so I’m looking forward to playing cricket again and getting back on the cricket field,” Bravo said.

Bravo was surprisingly named in West Indies’ World Cup reserves list. At 36, he may no longer be a spring chicken but his value cannot be undermined in T20 cricket with the experience of playing almost all T20 leagues across the world. With 490 wickets, Bravo is the leading T20 wicket-taker in the world.

As for the West Indies, who recently whitewashed Afghanistan 3-0 in ODIs, Bravo felt the result bodes well for the two-time ODI and T20I World Champions, after a woeful World Cup, where they finished second from the bottom.

“It’s a very good sign [for West Indies cricket],” Bravo said. “We know that in the last few years Afghanistan have been dominating West Indies and now I’m happy that things can turn. I’m happy for the coach, Phil Simmons. He is back in his second tenure as coach and also there is Pollard, the new captain, and other guys like [Nicholas] Pooran, Shai Hope, and Roston Chase – they are all stepping in. I’m happy with the performance of the guys and as long as they can continue and press on, it is heading in the right direction.” 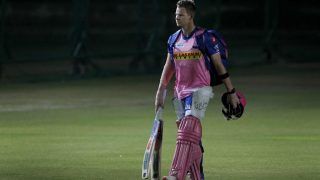 After a Summer of Some Tough Cricket, Looking Forward to Having Stokes, Buttler and Archer in my Team: Steve Smith