In the other game of the day, Vijaya Bank registered a narrow seven-run win over Reliance One. 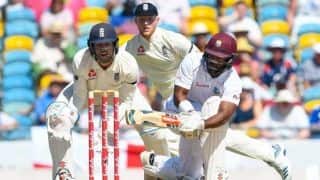