Manoj Tiwary brought up his 28th List A fifty playing for East Zone against North Zone in the first Deodhar Trophy semi final in Mumbai. Tiwary came out to bat at number four after East Zone lost two early wickets, that of Parvez Aziz and Virat Singh. Tiwary not only soaked all the pressure but took the attack to the North Zone bowlers. He has been Striking at more than run a ball . He was ably supported by Shrevats Goswami who contributed 43. The duo added 60 valuable runs before Amit mishra dislodged the partnership, getting rid of Goswami. East Zone are 108 for 3 in 26 overs. 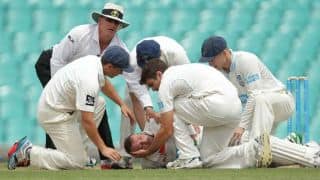