The England and Wales Cricket Board (ECB) on Tuesday announced that 20m will be invested in women's and girls' cricket over the next two years in an attempt to make cricket a gender-balanced sport.

The England and Wales Cricket Board (ECB) on Tuesday announced that 20m will be invested in women’s and girls’ cricket over the next two years in an attempt to make cricket a gender-balanced sport.

The board also said that they will invest 50m over five years to enable organisations across the cricket network to recruit more dedicated resources, improve the player experience, and increase the opportunities to build careers in the sport.

Another commitment the board made is funding of 40 full-time professional, domestic contracts which will be in addition to the existing England Women centrally contracted players.

There is a ten-point action plan which focuses on five key objectives:

Participation: To increase the number of women and girls playing cricket recreationally

Pathway: To develop aspiring female cricketers (U11-17) as players and people

Performance: To drive the performance of England women’s cricket through a new semi-professional, eight region structure

Profile: To elevate the profile of women’s cricket through The Hundred, the England Women’s team and the elite game

People: To increase the representation of women across the cricket workforce

“Cricket has been an integral part of my life, as a player and in my role of Managing Director of Women’s Cricket. I have never been more excited by the opportunity in front of us right now,” ECB’s official website quoted Connor as saying.

“Recent initiatives have given women and girls more opportunities to play, such as All Stars Cricket for 5-8-year-olds, the South Asian female activators programme, and the Kia Super League for our most talented domestic cricketers. But to truly transform women’s and girls’ cricket, we must now move from targeted standalone programmes to addressing the whole pathway as one,” she added.

“This action plan is a really exciting next step in the continued growth of women’s cricket. We need more young girls to be inspired to play and those young girls need to be able to see a clear pathway above them that encourages them to continue pursuing the game,” Knight said.

“As England players we’re fortunate enough to meet lots of young girls who love the game and it means so much to us to see how much they love cricket. Much of this plan is about normalising the game for women and girls and I’m excited to see how this increased opportunity takes the game forward,” she added. 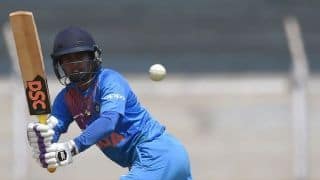