The ECB said Smith would be part of a "new approach to scouting, assessing and selecting players for the senior men's Test, T20 and ODI, ensuring greater connection right through the international pathway".

Former Test batsman Ed Smith has been appointed as England‘s new national selector, the England and Wales Cricket Board (ECB) announced Friday. The ECB said Smith, who succeeds James Whitaker, would be part of a “new approach to scouting, assessing and selecting players for the senior men’s Test, T20 and one-day sides, ensuring greater connection right through the international pathway”.

Smith, who had been a cricket writer and broadcaster, said: “I’m delighted to take on the role of national selector. I was very happy with what I was doing previously but the chance to be at the forefront of this development in English cricket was too good an opportunity to turn down.” The 40-year-old Smith, who has a first-class history degree from Cambridge University, has written approvingly of the ‘Moneyball’ approach to recruitment that has revolutionised the process of talent identification in major North American sports.

“Selection and talent ID have always fascinated me and I’ve explored extensively how they are evolving,” he added Friday in an ECB statement. It is an exciting time for England cricket. I’m very much looking forward to working with (head coach) Trevor (Bayliss), (Test captain) Joe (Root) and (limited-overs captain) Eoin (Morgan), as we work towards ensuring that the talent in English cricket feeds into consistent performances in all formats of the game.”

Smith will appoint a full-time independent selector to work alongside him and Bayliss in a three-man panel, with a new scouting system reporting to the trio. A former Kent and Middlesex captain, batsman Smith played three home Tests for England in 2003 after a prolific run of county form. He scored 64 in his first Test innings but managed only 23 more runs in his next four innings and was dropped.

ECB director of England cricket Andrew Strauss, a former Middlesex colleague of Smith, said: “Ed stood out as an ideal candidate for the role for a number of reasons. There is real depth to his talent identification knowledge and he’s done a great amount of research into the subject.” Strauss, himself a former England captain, added: “He has a rich and varied sum of experiences having played professional cricket for 12 years and having written extensively on cricket and other sports.

“As well as this he has a strong academic interest in high performance and excellent knowledge of the international game. Ed will come to this role with fresh ideas and his input will help us implement a structure that we hope can become world-leading, not just in cricket but in sport generally.” 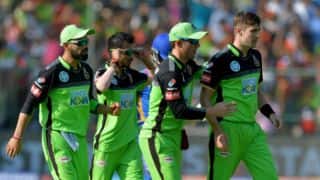