Less than a fortnight after it was criticised by Indian captain Mahendra Singh Dhoni as an 'ugly' wicket, the Eden Gardens strip is back in focus again. 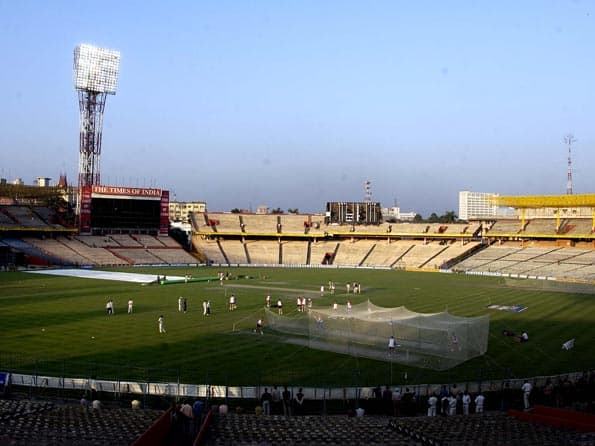 Less than a fortnight after it was criticised by Indian captain Mahendra Singh Dhoni as an ‘ugly’ wicket, the Eden Gardens strip is back in focus again.

Staging the second India vs West Indies Test from November 14, the much-criticised Eden wicket will hold the cetrestage with milestone man Sachin Tendulkar eyeing his 100th ton in international cricket.

Understandably, Eden curator Prabir Mukherjee who has been in the business since 1989 is under some pressure.

Even as the 80-year-old maintains that there’s no added pressure on him, his recent hush-hush meeting with CAB boss Jagmohan Dalmiya tells a different story.

The CAB refuses to confirm but sources claim the Board has sent instruction to the curator for a specific tailor-made wicket, especially after India’s Twenty20 loss to England on October 29.

Incidentally, there was an air of displeasure among the Bengal and Gujarat cricketers during their Ranji Trophy Super League opener earlier this week.

But the Eden curator asserted that an ideal Test wicket had been laid out for the second Test.

“People love to make concocted stories. They see me meeting with (Jagmohan) Dalmiya and write stories that he has issued me a warning, likewise,” Mukherjee quipped.

“I am not new to this field. I know my job quite well. So these things don’t really affect me,” Mukherjee told PTI.

“If the wicket was poor and on the slower side, England could not have won handsomely, chasing 121 with more than an over to go. As for Ranji, Bengal could not have logged three points,” he argued.

But it would be an altogether different and fresh stip for the Test match with a bit of grass, Mukherjee said.

“It’s Test pitch after all… There would be some grass. It would be an ideal condition for the batsmen and for the bowlers as well. The idea is to make sure it lasts the entire five days,” he said.

Traditionally a batters’ paradise, the Eden it seems would be no different this time, giving Tendulkar a fine opportunity to get to that mark that has been eluding him for quite a long time.

With a bit of grass, it would have something for the seamers but it remains to be seen how the ball moves to the wicketkeeper, something that has been a cause of concern at the Eden.