BCCI officials N Srinivasan and Prasanna Kannan were summoned to appear before the adjudicating authority on March 7.

Mumbai: The Enforcement Directorate (ED) on Tuesday cross-examined Board of Control for Cricket in India (BCCI) officials in connection with an alleged case of violation of the Foreign Exchange Management Act, in Mumbai. BCCI officials N Srinivasan and Prasanna Kannan were summoned to appear before the adjudicating authority on March 7. However, Srinivasan sought an adjournment to a future date. It may be recalled that earlier Sundar Raman and Chirayu Amin who were also supposed to appear before the adjudicating authority had skipped the date and sought an adjournment.

“As per the established norms and procedures compliance of FEMA regulations essentially come under the domain of the key functionaries of any organisation like the BCCI. As such the contentious issue in this regard is being contested by Lalit Modi‘s lawyers before the ED authorities for alleged FEMA violations since it was the president, secretary and treasurer of the BCCI who were entitled to take decisions concerning the FEMA regulations,” said Mehmood Abdi, counsel for Former Indian Premier League (IPL) chairman Lalit Modi, in an official statement.”Under the high court order, ED must complete the cross-examination before March 12. Srinivasan was scheduled to be cross-examined on March 7 at 11:30 am in ED office at Mumbai along with co-noticee Prasanna Kannan,” said the counsel.

A new date will be given to him for his appearance. Last month, the Bombay High Court accepted Modi’s plea to cross-examine the top officials of the Board of Control for Cricket in India (BCCI) who were in power in 2009. On July 20, 2011, the ED had issued show cause notices to Modi and the BCCI under provisions of FEMA regarding the alleged transfer of a sum of Rs 243.45 crore to Cricket South Africa without prior permission of the RBI ahead of an IPL tournament in 2009.

The ED was subsequently allowed by the HC to summon several former BCCI officials, including then president Shashank Manohar and then secretary N Srinivasan, as witnesses in the matter. 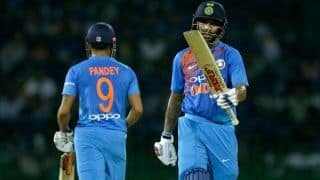