England trails New Zealand by 16 runs after the end of Day 1 play.

New Delhi: England captain Ben Stokes had a mixed start to his captaincy debut. A magnificent bowling spell by James Anderson and Matty Potts helped England bowl out New Zealand for 132 in the first inning, giving the hosts a big advantage in the match. However, the lead did not last long as the Kiwi bowlers exposed the vulnerabilities in English batting and reduced the hosts to 116-7 at the end of Day 1 of the first Test at Lord’s.

Ahead of the game, Stokes won the hearts of fans by showing support to former England batter and assistant coach, Graham Thorpe, who is in hospital, in a critical condition. While walking out for the toss, Stokes wore the traditional Blue Blazer before taking it off to show the special jersey with Thorpe’s 564 imprinted on it.

“Everybody’s aware that Graham Thorpe is unfortunately very unwell at the moment in hospital,” said Stokes, after losing the toss.

“I’ve spoken with his wife, Amanda, and she’s been very grateful for the respect and privacy that her family have received, and she hopes that does continue.

“Me wearing this shirt on behalf of me and the team is our support to him, his wife, his kids and family during this tough time because we all love Thorpey and he means a hell of a lot to us.”

Stokes also paid tributes to his late father Ged, who passed away in 2020 after a long battle with Cancer. His training shoes featured Ged 500 and the familiar hand gesture where he bends his middle finger at the knuckle and raises it aloft in honour of the finger Ged lost during his rugby career.

Speaking about the late Shane Warne, Stokes said, “He’s a huge character of the game, one of the game’s legends and probably the greatest to grace the game. It’s a great honour to play a game in memory of Warney’s great man.” 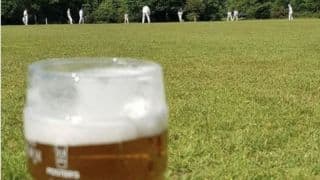