Driving for Red Bull for Sunday's race, Stokes had qualified at the 16th spot.

England allrounder Ben Stokes finished last in his first virtual Formula 1 race, competing for the Vietnam Grand Prix, which was won by another debutant Charles Leclerc.

Driving for Red Bull for Sunday’s race, Stokes had qualified at the 16th spot. He though spun on the fourth lap of the 29-lap race and finished 18th, a rung behind former F1 driver Johnny Herbert.

Although, to his credit, Stokes began on a promising note before being lapped by Stoffel Vandoorne who was in a Mercedes.

Sunday (April 5) was the original date for the inaugural Vietnam Grand Prix before it became one of the eight races to either have been cancelled or postponed due to the coronavirus pandemic.

Stokes later tweeted, “It’s the taking part that counts….it’s what I always tell my kids.”

It’s the taking part that counts….it’s what I always tell my kids

Stokes’ England teammates Stuart Broad and Eoin Morgan were there to support him.

Stokes even invited Broad to participate in the next race, an offer he seems to have accepted.

Both of us in next race Stu??? Then I can compete against someone rather than driving by myself and getting lapped https://t.co/QJTfmsbYUn

“It was unbelievably hard,” said Leclerc, who led from start to finish. “We are sitting on a chair, so there is not even the G-force we have in a real car, but I am sweating like crazy. The muscles are not hurting but the concentration and everything, I’ve been sweating a lot.”

The next official virtual race is the Chinese Grand Prix on April 19 . 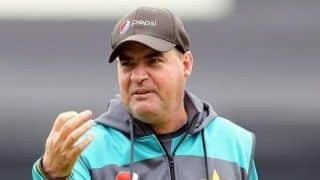