England's lengthy tour of South Africa winds up with two Twenty20 internationals which are effectively a rehearsal ahead of ICC World T20.

Le Cap: England’s lengthy tour of South Africa winds up with two Twenty20 internationals which are effectively a rehearsal ahead of their clash in the World Twenty20 in India next month. It will be the last chance for England to settle on their World Cup combinations ahead of the world event but South Africa will have three more matches in a home series against Australia shortly before they fly to India. The two countries are in the same group in India and meet in Mumbai on March 18. ALSO READ: South Africa squad for ICC World T20 2016: Faf Du Plessis set to lead charge; injured Dale

South Africa’s squad is the same as that named last week for the World Twenty20 but two of England’s squad — Liam Plunkett and Chris Woakes — will not be going to India. Left-arm spinner Liam Dawson, named in the World T20 squad, has flown to South Africa to train with the England party.

James Vince, who was a key member of England’s winning team in a T20 series against Pakistan in the United Arab Emirates in November, is expected to get game time after missing selection for the recent one-day series. Sam Billings is another T20 specialist who was not part of the Test or one-day squads. ALSO READ: England squad for ICC World T20 2016: Kevin Pietersen, Chris Woakes ignored; spinner Liam Dawson selected

Alex Hales, man of the one-day series, continued his good form when he made 78 in England’s 44-run warm-up win against South Africa A in Paarl on Wednesday, while captain Eoin Morgan had a return to form when he slammed 42 off 13 balls, with five sixes.

Although ten of the South African squad played in the 2014 World T20, their tactics are expected to be different, with star batsman AB de Villiers likely to be near the top of their batting order, instead of coming in lower down as was the case two years ago. Coach Russell Domingo said: “AB will bat near the top of the order at this event.” He said this was because there was now more experience in the South African team. “For a couple of years, the experience wasn’t what it is now so we felt we had to keep AB in that (lower) position,” said Domingo.

Former South African batsman Neil McKenzie will act as a batting consultant during the upcoming series and at the world event in India. 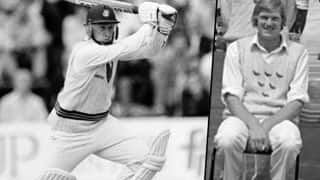