Perth: England cricket team’s assistant coach Paul Farbrace Tuesday said the Eoin Morgan-led team is working hard and improving all the time to give themselves the best chance of winning the ICC World Cup 2015 which has eluded them from the beginning.

The Englishman who was instrumental in Sri Lanka’s success last year, when they clinched both the Asia Cup and World Twenty20 titles, said anything was possible if they make it through to the knock-out stages of the quadrennial tournament.

“I wouldn’t sit here now and say we’re going to win the World Cup. What I would say is if you get through to the knock-out stages anything is possible,” Farbrace was quoted as saying by bbc.com.

“The aim is to get to the quarter-final and once you do then literally anything can happen. We know we’re improving all the time, we know we’re working really hard and we want to give ourselves the best chance we possibly can.”

The 47-year-old also added that the team’s progress is exciting and they would be treating the knockout game against India this Friday in the tri-series as a great opportunity to test the squad in a pressure game.

“I’d be foolish to say we’re developing that well we’re going to win the World Cup. But I do think there’s a lot of signs of really exciting progression,” he pointed out.

“There are three games of knock-out [in the World Cup] once you get to that quarter-final. That’s why Friday’s such a great opportunity to put the boys under real pressure in a semi-final game,” he added. 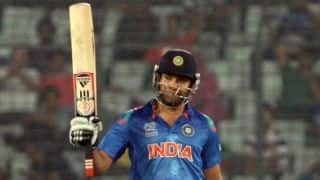