England are grouped along the likes of South Africa, West Indies, Sri Lanka and Afghanistan in Group 1 of Super 10 stage.

England pulled a thrilling 14-run win against Mumbai Cricket Association (MCA) XI in their final warm-up match at Mumbai on Monday. Jos Butler and James Vince, who played for the local team, failed to lead MCA XI to a win against their countrymen. Chasing England’s target of 178, Mumbai’s local boy Jay Bista top-scored with 51 off 37 balls but fell to Moeen Ali’s bowling in the 12th over when MCA XI still needed 79 from the final right overs. After his dismissal it was Vince who was counter-attacking the England bowling line-up but could not finish the job successfully when Chris Jordon smacked his stumps in the 17th over. FULL CRICKET SCORECARD: England vs Mumbai Cricket Association XI, warm-up match, ICC World T20 2016 at Mumbai

England have now won both their warm-up matches ahead of the Super 10 stage of ICC World T20 2016. They are grouped along the likes of South Africa, West Indies, Sri Lanka and Afghanistan in Group 1 of Super 10 stage. England played their first warm-up match against New Zealand and they thrashed the Black Caps by six wickets at Wankhede on Sunday. Despite David Willey bagging a hat-trick in today’s match, Mumbai went on lose. Similarly, Josh Hazlewood had claimed a hat-trick during Australia’s warm-up tie against West Indies and it was Australia who finished on the losing side at Eden Gardens on Sunday.

Earlier, Jason Roy and Alex Hales gave a flying start to England, putting up 69 runs for the first wicket from just 6.3 overs and helped England post 177 in their 20 overs. Later the duo of Joe Root and Ben Stokes took the charge of runs following the dismissal of both the openers. Stokes and Root shared a stand of 69-run for the fourth wicket of 6.5 overs. 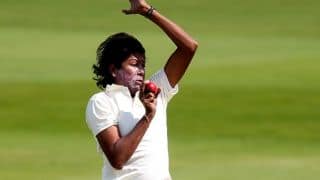