Former England captain Alec Stewart won't be surprised if the home team record a clean sweep over India in the ongoing ODI series as well, irrespective of the visitor's resolute show in the rain-marred opener at Cheste-le-Street. 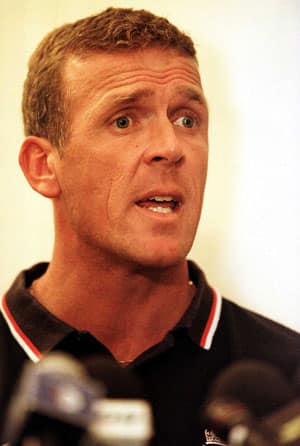 Former England captain Alec Stewart won’t be surprised if the home team record a clean sweep over India in the ongoing ODI series as well, irrespective of the visitor’s resolute show in the rain-marred opener at Cheste-le-Street.

“India may have begun the series as slight favourites but I wouldn’t be surprised if England finish off the season with a clean sweep in all forms of the game and add this trophy to the growing collection,” Stewart said.

In the first ODI of the five-match series last weekend, India were in the the drivers seat with England, chasing a competitive 275-run target, were tottering at 27 for two before heavy showers forced the match to be called off.

But Stewart was of the view that the weather intervened far too early during England’s innings for serious talk about the hosts being ‘saved by the rain’.

“This England side has it in them to rise again after such early reverses,” he said.

“After the 4-0 thrashing of India in the Test series followed by the one-off T20 victory last week, England will want to show they are also making good progress in the 50-over game which for so long has been their Achilles heel,” the former wicket-keeper added.

Stewart, however, has no doubts that to record a clean sweep, England will have to play out of their skin against the the world champion Indian side.

“As England march on towards world cricket supremacy they will be severely tested by India, the current World Cup holders, throughout these One Day Internationals,” he wrote in his column for Daily Mirror.

He insisted that having never won the World Cup, England will be desperate to break the jinx in the 2015 edition of the tournament to be co-hosted by Australia and New Zealand.

“Captain Alastair Cook is fully aware that if this group of players want to be bracketed alongside the truly great West Indian and Australian teams of recent times then they must become more consistent in ODIs and learn what it takes to win in all conditions,” Stewart said.(PTI)