England deserve to be No. 1: Donald

England deserve to be No. 1: Donald 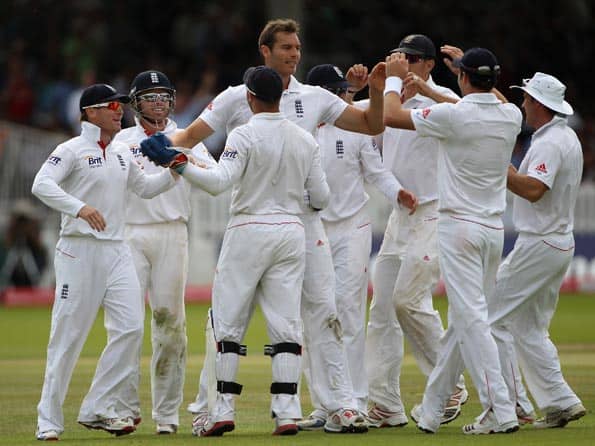 “England deserve to be the number one, there’s no question about it,” Donald told ‘BBC Radio 5 live’.

England beat India by 196 runs in the opening Test of the four-match series, putting up a thoroughly clinical performance against their depleted opponents, who were a bowler short after Zaheer Khan’s hamstring injury.

Donald said England are improving with every passing game.

“There’s no question. Chris Tremlett, Broad, Anderson and Graeme Swann are fantastic. Then you’ve got a few more in the bank — Tim Bresnan still in the wings,” he said.

Anderson has led the attack with absolute disdain, Broad has gone through a few ups and downs of late.

“It’s good to see him really back and firing, bowling really well with a lot of aggression too. It’s nice to know you’ve got this current crop who are playing and you’ve also got a few youngsters in the wings as well,” he added.

Donald, who took 330 Test and 272 one-day wickets, said felt India were “ripe for the picking” in the series-opener but expected them to bounce back in the remaining matches, starting with the Trent Bridge Test from Friday.

“India will find a way and [coach] Duncan Fletcher will dig very, very deep to his charges. This is a wake-up call to them. Number one is number one but it might not be for very long. They will come back. Zaheer Khan is key to their success,” he said.

“If he’s fit and raring to go, he might have a bit to say in the second Test,” he added.

Flower asks Panesar not to give Tendulkar net practice

Patel ton not enough to save Kenya the blushes