England carved effortlessly into New Zealand's huge first innings lead as they reached 139 without loss at tea on the fourth day of the first Test at University Oval in Dunedin. 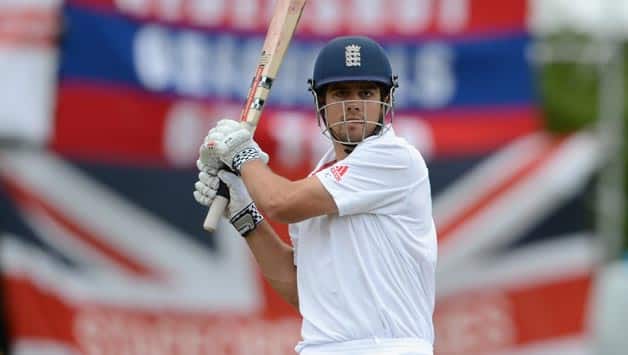 Alastair Cook was unbeaten on 64 at Tea © Getty Images

England carved effortlessly into New Zealand’s huge first innings lead as they reached 139 without loss at tea on the fourth day of the first Test at University Oval in Dunedin.

Captain Alastair Cook was on 64 with Nick Compton on 60 as they made light of the New Zealand attack on the friendly wicket.

New Zealand resumed the day at 402 for seven and declared at 460 for nine to hold a convincing 293-run lead.

In a whirlwind opening session, New Zealand cracked 58 runs in less than nine overs as Brendon McCullum raced from 44 to 74 and Bruce Martin advanced from 17 to 41.

McCullum declared after the dismissal of the overnight pair to give his bowlers more than an hour before lunch to attack the England line up who had folded for 167 in their first innings.

But the conditions were weighted heavily in favour of the batsmen who progressed cautiously to 58 in 22 overs before lunch and then added a further 81 runs in 32 overs during the middle session.

Their only moment of concern came when Compton flicked at a Tim Southee delivery heading down the legside, sparking a confident appeal from the New Zealanders.

However, both the appeal and the subsequent review were turned down.