Sri Lanka seamer Shaminda Eranga took three wickets in quick succession as England collapsed on the fourth day of the first Test at Lord’s on Sunday. England were 117 for five in their second innings at tea, a lead of 239, after Eranga had dismissed Sam Robson, skipper Alastair Cook and Ian Bell.

Left-arm spinner Rangana Herath followed up by removing Joe Root, whose unbeaten 200 had been the cornerstone of England’s first innings 575 for nine declared, and debutant Moeen Ali. Gary Ballance was 25 not out and Matt Prior 13 not out. A docile pitch had so far largely frustrated both attacks in the first match of this two-Test series, but Eranga defied the sluggish surface with a dynamic spell of three wickets for three runs in 21 balls after lunch.

Cook was caught behind for 28 before Australia-born Robson completed an unsuccessful England debut on his Middlesex home ground by being bowled off the inside edge for 19. That gave Robson a total of 20 runs for the match after his first-innings one. Bell struck one classic cover-drive for four before he fell in similar fashion to Robson, bowled off the inside edge by Eranga on the drive.

England were now 69 for three as Root, in at 74 for three in the first innings, walked out. But he was undone by a fine piece of bowling from Herath on Sunday, defeated by a change of pace, angle and flight that saw the ball skid on and hit him on the back leg. Ali, one of three England debutants along with Robson and all-rounder Chris Jordan, confidently went down the pitch to drive Herath straight back over the bowler’s head for four. But next ball Herath had his revenge when, spinning one out of the rough, he clean-bowled Ali after the left-hander went to drive.

England were now 102 for five, with Herath having taken two for four in three balls. Prior had been fortunate in the first innings of his comeback Test to be given not out second ball when he challenged a close lbw call before going on to make 86. It was a similar story on Sunday when, with the wicketkeeper again on nought, he was given not out by New Zealand umpire Billy Bowden in response to Herath’s lbw appeal. Sri Lanka challenged and although replays showed the ball had hit the pad first, the “umpire’s call” on whether the ball had hit Prior outside the line of off stump was upheld in the batsman’s favour, just as it had been in the first innings. 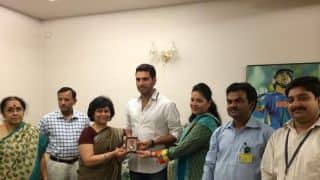 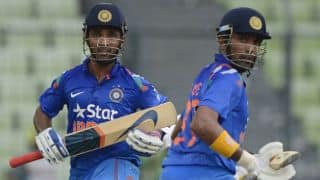