The stadium is set to host the 1st Test of the series between West Indies and England.

St. John’s, Antigua: Antigua and Barbuda Cricket Association (ABCA) president Leon Rodney has said the country is ready to host the curtain raiser for the upcoming three-match Test series between the West Indies and England. The ABCA chief said on Wednesday that the cricket-loving island had all systems in place for the five-day event which is set to bowl off next Monday at the Vivian Richards Cricket Stadium, reports CMC.

“We will have everything in place for the players and officials and fans from all over the world to enjoy the experience at the Sir Vivian Richards Cricket Grounds,” Rodney said. “We are a hospitable people and we love our cricket and we are serious about setting high standards as we host this match.”

Rodney, a former Antigua and Barbuda and Leeward Islands coach, backed the idea that Monday, the opening day of the Test, be declared a public holiday. Reportedly, there have been discussions at the government level to facilitate this move but authorities here are yet to decide.

“I don’t think it’s a bad call. With the England Test series, giving Monday off wont be considered a waste day or being unproductive. It would give the local people a chance to go out and support their team,” Rodney contended.

“The ground is in lovely shape. We have a professional team working to get things right for the start of the match. The Antigua and Barbuda Cricket Association is doing all it can, with the assistance of the government and the people to make sure we have a great start to the series.” Original estimates suggest that between 2,000 and 3,000 visitors, most of them from the United Kingdom, are expected on the island for the match.

Antigua suffered embarrassment in 2009 when the Test match between the West Indies and England had to be abandoned after just ten deliveries because of a sandy outfield at Vivian Richards Cricket Ground, that was deemed unfit for play. The game was subsequently moved to the ABCA’s ancestral home at the Antigua Recreational Ground where the teams played out a draw. Rodney urged Antiguans to turn out in large numbers and support the upcoming contest.

“We urge the people to come out and support the Test match in Antigua and the West Indies team. We want to back the team,” he said. “The best day would be Monday – the opening day of the match and the start of the series. It would be a chance to give that absolute momentum and full support to our team and tell them ‘go out and beat up the English team’.” 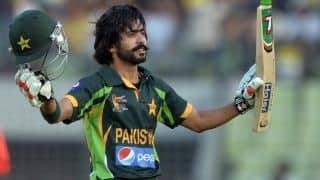